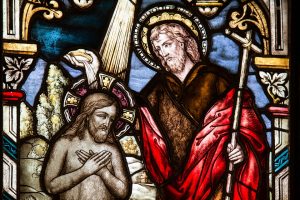 Our Patron Saint is St. John the Baptist, first cousin of our Lord Jesus Christ, and an initiator in a revolutionary new spiritual path for any who would come.

John was a radical. He refused to be ruled by the religious traditions of his day. Rather than wearing “wide borders” on his cloak and engaging in ostentatious displays of public piety, he wore camel skin and ate wild honey. Rather than ritual baths in the Court of the Temple, he would perform ceremonial baptisms in a river in the wilderness. Rather than a dry public religion, he taught a religion of personal responsibility and an urgent call to “turn away” from the chains that enslave our hearts and minds. This insurrectionary approach to church life is only the first of the lessons we learn from his life.

John also doubted. Whereas St. Thomas is better known as the “doubter” that refused to belief in the risen Lord until he could see and touch the Resurrection, St. John too doubted the Divine nature of Christ. As he waited in prison, he sent a servant to Jesus asking if He was indeed the Messiah. As part of His response, Jesus replied that there was no greater prophet that ever lived than John the Baptist. Questioning even the most fundamental aspects of our faith is yet another lesson we take from the Baptist, confidant that such questioning does not diminish our place in the Kingdom of Heaven.

John was also “voice of one calling in the Wilderness.” While it often seems that the world has gone mad, enslaved by perverse passions and unyielding forces, by “principalities and powers and darkness in heavenly realms,” there is always a remnant that is faithful to a higher calling:

This is our greatest lesson from our Patron: even in a world in which privations, moral, spiritual, and physical are the norm , we will be the “weirdos” that strive to defy that system. We choose love, even until death, just like the Baptist that inspires us. This is our perennial aim.